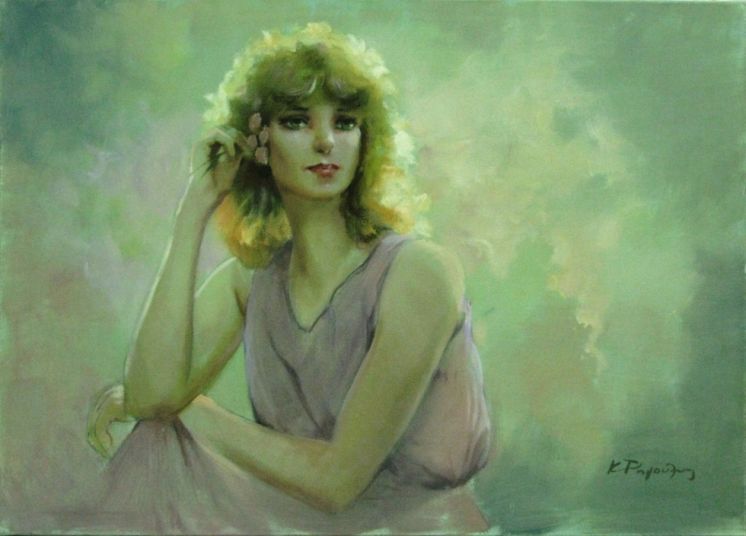 He is one of the most popular Greek painters, with lots of artworks and oil paintings on canvas.

Kostas Rigoulis - Tsigris was born in Megara, Athens in 1954. He began his studies at the Mathematics Department of the University of Athens but his love for the painting turned him in other directions. He studied at the Athens School of Fine Arts under D. Mytaras and P. Tetsis.

In the early years of his painting worked on almost all issues but mostly landscapes with performances inspired by ancient sculptures and compositions where the dominant element was the human figure with realistic representation. In the course of his work begins to remove the naturalistic elements and emphasizes the structure and composition of shapes dictated by the display while reaching color largely saturated. Having more female figure almost exclusively dominant theme begins to add symbolic elements in his compositions passing to a more dreamlike world.The forms are more realistic and restores the detail as necessary element of artistic expression.

He works primarily with oils but having experimented and used various materials and techniques which give greater expressiveness to the subject and enrich the composition with differentiation. Since 1991 maintains tutorial preparing candidates for the entrance examination of the Fine Arts and Architecture schools. General influences in his work from the lessons of the great masters of the Renaissance to the present. Believes that the painting is asked to give the viewer the opportunity to see a new look the world and play many roles decorative, teaching, militant the driver of his dreams. Above all invited to make him see the beauty of the shape and the color scheme in the formulation of the image and quality of the art.

Some of his artworks and oil paintings on canvas can be found at Gallery Diamanti at very affordable prices.