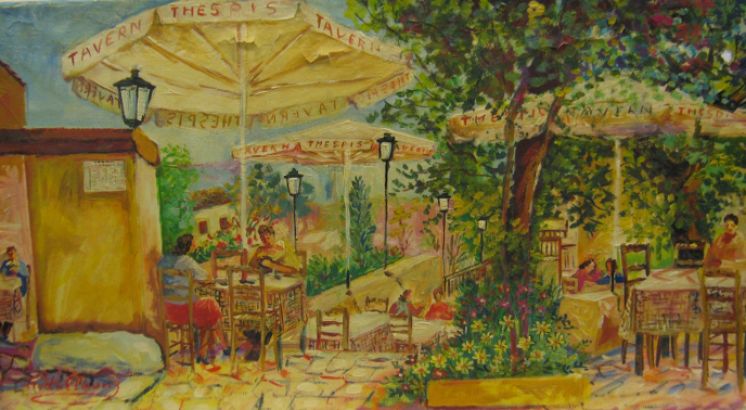 He is one of the most popular Greek painters, with lots of artworks and oil paintings on canvas.

George Savvakis (1924-2004) was born in Psirri, but lived and worked in Plaka until his death. He began to paint as a self-taught, from his school years in primary school. In 1956 plans murals in more than 40 taverns of old Athens. In the mid 60s, travels to Switzerland, where he lives and works for a short time. Since 1973, with the insistent exhortations of his friends, he begins to sculpt and canvas. In 1980, he presented his first solo exhibition in the Athenian gallery "Diogenes". Here are many individual and collective exhibitions in Greece (Athens, Thessaloniki, Heraklion) and abroad (H. P. A., Canada, United Kingdom, France).

In 1991 he was awarded the title of Knight of Elia from the homonymous Brotherhood (Confrerie des Chevaliers de l'Olivier) in Nyon France in recognition of his work. In February 2006, two years after his death, organized by the latter, so far, report creations in the restaurant "Sea" in Manhattan. His works are in the Museum of Greek Folk Art Museum in the north, in the collection of the National Bank, the International Folk Art Museum in France and in private collections, while frescoes adorning, still, traditional tavernas in the Plaka area, such as "Tavern Vlachos, "the" Cave ", the" Tavern Stamatopoulos ", the" Fisherman's Tavern ", the" Platanos ", the" Grapevine ", the" Shuttle "and" Ambrosia ".

Some of his artworks and oil paintings on canvas can be found at Gallery Diamanti at very affordable prices.